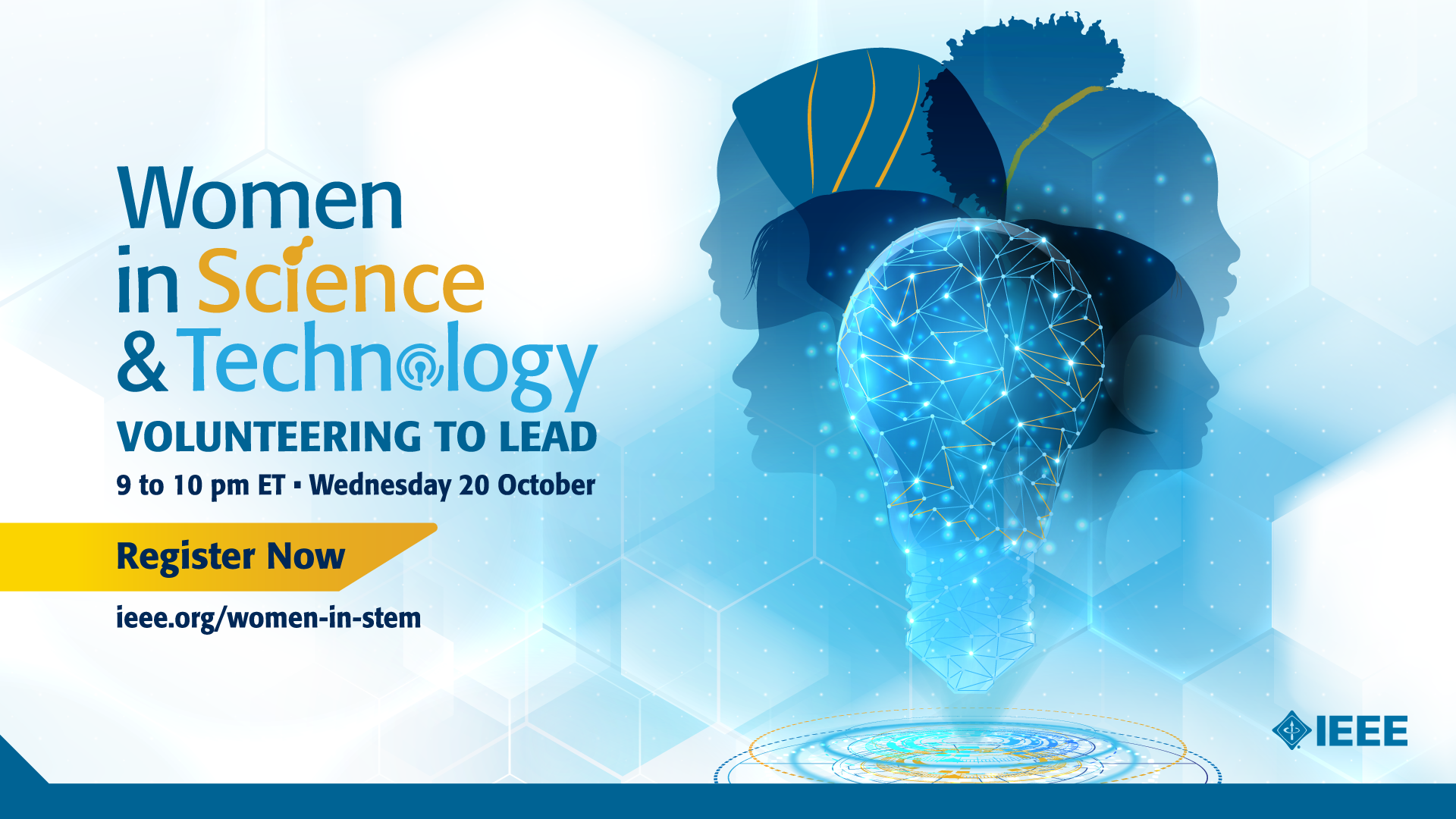 This is a Virtual Presentation on IEEE.tv

Register NOW for a Reminder!

The Women in Science & Technology: Volunteering to Lead panel includes the top female leadership in nonprofit membership organizations representing the many facets of the science, technology, and engineering industries.

The discussion will focus on why the panelists chose to pursue careers in these industries and their experiences as women in science and technology. In addition, they will explore why they found it important to volunteer their time and talent and the impact women leaders are making across science and technology.

More About the Panel:

2021 IEEE President & CEO, Susan K. (Kathy) Land is a Program Manager for the U.S. Department of Defense’s Missile Defense Agency. She has more than 30 years of industry experience in the application of software engineering methodologies, the management of information systems, and leadership of software development teams.

Kathy served as the 2018 Vice President, IEEE Technical Activities. She also served two additional terms on the IEEE Board of Directors as Division VIII Director/Delegate in 2011 and 2012 and as Division V Director/Delegate in 2014 and 2015. She was President of the IEEE Computer Society in 2009. Kathy was a member of the IEEE-USA Board of Directors in 2013 and 2016.

Kathy has been an active member of the IEEE Standards Association for more than 20 years and served as the Computer Society Vice President for Standards in 2004. She was the recipient of the 2007 IEEE Standards Medallion.

An IEEE Fellow, Kathy is the author and co-author of a number of texts and publications supporting software engineering principles and the practical application of software process methodologies. She is an IEEE-HKN Member and IEEE Computer Society Richard E. Merwin Award recipient.

Marcia McNutt (B.A. in physics, Colorado College; Ph.D. in Earth sciences, Scripps Institution of Oceanography) is a geophysicist and the 22nd president of the National Academy of Sciences.

From 2013 to 2016, she was editor-in-chief of Science journals. McNutt was director of the U.S.Geological Survey from 2009 to 2013, during which time USGS responded to a number of major disasters, including the Deepwater Horizon oil spill. For her work to help contain that spill, McNutt was awarded the U.S. Coast Guard’s Meritorious Service Medal.

In 1998, McNutt was awarded the AGU’s Macelwane Medal for research accomplishments by a young scientist, and she received the Maurice Ewing Medal in 2007 for her contributions to deep-sea exploration.

Karen Ohland, M.S., is the President-Nominee of the American Society of Mechanical Engineers (ASME), a Fellow of ASME, and has been an active member of ASME since 1983.

Karen is currently the Associate Director for Finance and Operations at the Princeton University Art Museum. She also served as finance and senior administrator at New York Metropolitan Museum of Art’s Department of Education and Concerts and Lectures.

Prior to her career in museum administration, Karen worked as a biomedical engineer in industry, academia, and government; with the San Diego Veterans Affairs Medical Center, the University of Pittsburgh Medical Center, Pfizer, and Stryker, most recently as research manager for Howmedica Osteonics Inc., an orthopedic implant manufacturer.

Karen served on the ASME Board of Governors from 2016 to 2019, and in 2020 she was selected by the Board to return to complete a vacated Governor position. Since joining ASME, Karen has held many leadership positions and served on several Presidential Task Forces, committees, and boards.

Karen is a recipient of the ASME Dedicated Service Award. She is a member of the engineering honor society Tau Beta Pi, the American Society of Engineering Education, the Orthopedic Research Society, and the American Society of Biomechanics. Karen also serves as an ABET evaluator and a FIRST Robotics Regional Championship judge. Karen received bachelor’s degrees in engineering and biology from Swarthmore College in Pennsylvania and a master’s degree in anatomy from the University of Chicago.

Angela K. Wilson is the President-elect of the 155,000-member American Chemical Society. She is also John A. Hannah Distinguished Professor of Chemistry, Associate Dean for Strategic Initiatives in the College of Natural Sciences, and Director of the MSU Center for Quantum Computing, Science, and Engineering at Michigan State University.

She has served as Division Director (head) of the NSF Division of Chemistry from 2016-2018, responsible for $1B in research and infrastructure investments across the nation. Prior to this role, she was the Associate Vice Provost for Faculty at the University of North Texas, a university of 40,000 students.

Her research spans drug discovery to the development of quantum mechanical methods for the heavy elements. Her computational methods are utilized worldwide.

She has published over 200 papers in scientific journals, book chapters and conferences and holds over 100 patents. She is co-author of the book “Green and Software-defined Wireless Networks - From Theory to Practice” and has also Co-edited two books: “Ultra-dense Networks - Principles and Applications” and “5G Networks - Fundamental Requirements, Enabling Technologies, and Operations Management.” She is a Fellow of IEEE and a Fellow of the Wireless World Research Forum (WWRF). Her current research interests center around ICDT Deep Convergence: “From Green & Soft to Open & Smart.”