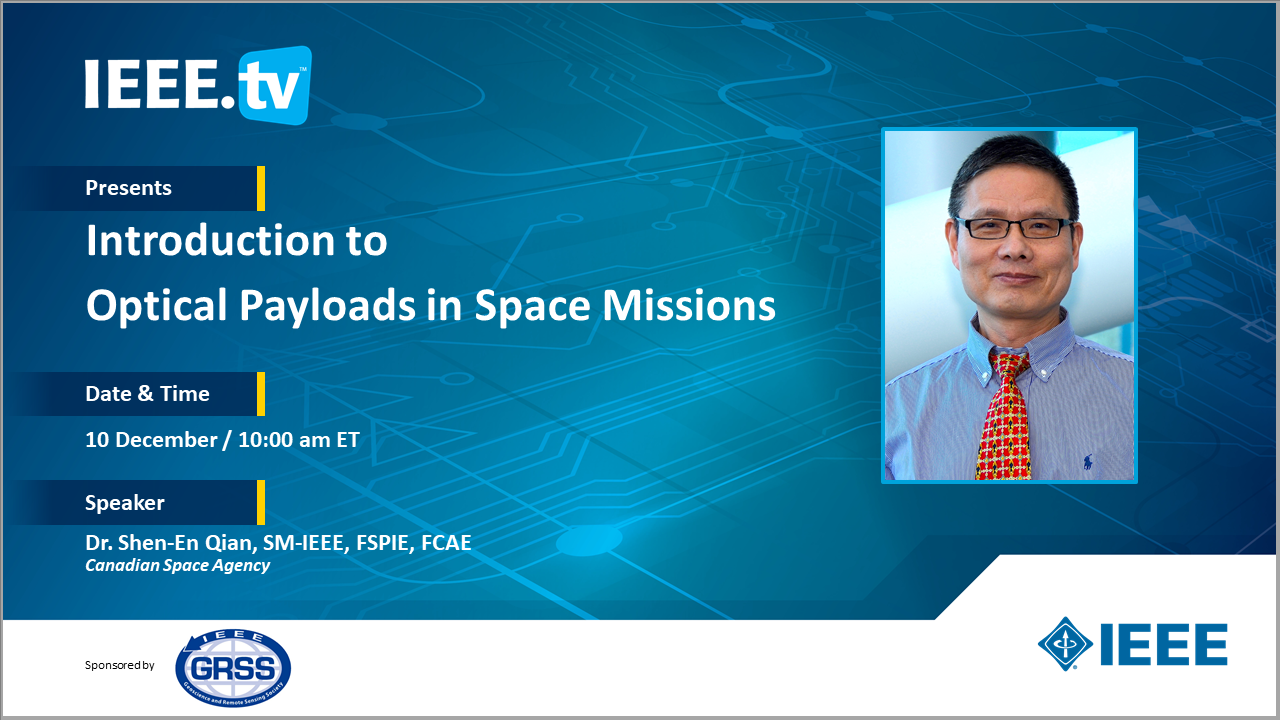 This is a Virtual Presentation on IEEE.tv

Instruments or sensors and the associated software aboard a satellite or spacecraft are referred to as payloads. Payloads sense or interact with the subject to fulfill the objectives of space missions. Payloads are typically unique to each space mission and are the fundamental reason why the satellites are flown. Optical payloads are widely used in space missions. They measure reflective light in wavelength range from ultraviolet, visible to infrared. Optical payloads are the core of many space missions including Earth observation, space exploration, astronomy, imagery, surveillance, etc. They largely dominate the mission’s cost, complexity, and effectiveness. In this lecture, Dr. Qian will provide an introduction to optical payloads in space missions. He will briefly describe six kinds of optical payloads, including hyperspectral imagers, multispectral imagers, Fourier transform spectrometers, lidar and active sensors, radiometers and spectrometers, and other type optical sensors. For each kind of payloads, he will present one or two well-known payloads as examples and their associated missions and applications.

Dr. Shen-En Qian received his Ph.D. in Telecommunication and Electronic Systems in 1990. He is a top government scientist at the Canadian Space Agency (CSA) for near 30 years and a world recognized expert in spacecraft optical payloads. As a sole author/editor, he has published four books on optical satellites, system design and signal processing (Optical Payloads for Space Missions, Hyperspectral Satellite and System Design, Optical Satellite Signal Processing and Enhancement, Optical Satellite Data Compression and Implementation). He is a Technical Lead of space missions and Scientific Authority of government R&D contracts awarded to industry and academia in the development of space technologies for satellite missions and deep space exploration. Dr. Qian holds 35 patents granted worldwide developed in Canadian government laboratories. He has published over 120 scientific papers. He received the IEEE Canada Outstanding Engineer Award and Silver Medal in 2019. The Governor General of Canada presented him with the prestigious national award “Public Service Awards of Excellence” in the category Scientific Contribution. He was the first recipient of the Canadian Government Invention Award at the CSA. He received the Marie Curie Award issued by the European Union. He is an Associate Editor of the Journal for the Applied Remote Sensing, and IEEE J-MASS. He is an adjunct professor at York University. Dr. Qian is a fellow of the Canadian Academy of Engineering (CAE), a fellow of the International Society of Optics and Photonics (SPIE), and a Senior Member of IEEE.