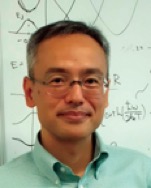 Professor Yasunobu Nakamura studied electrical and thermal transport properties of high-temperature superconductors at The University of Tokyo and received a BSc from Department of Applied Physics in 1990 and an MSc from the Superconductivity Research Course in 1992. He then joined the Fundamental Research Laboratories of NEC Corporation, working on mesoscopic electronic devices. In 1999 he demonstrated the first superconducting qubit. From 2001 to 2002, he spent a year with the Department of Applied Physics at the Technical University at Delft as a Visiting Researcher. He received a Dr. of Engineering degree from the Department of Applied Physics, at The University of Tokyo in 2011. He moved to the current position in the Research Center for Advanced Science and Technology (RCAST), at The University of Tokyo, in 2012. He is also affiliated with the RIKEN Center for Emergent Matter Science as a Team Leader of the Superconducting Quantum Electronics Team since 2014. His current research interests are quantum information processing using superconducting circuits, microwave quantum optics, and hybrid quantum systems. He received the Sir Martin Wood Prize and the Nishina Memorial Prize in 1999, the Agilent Technologies Europhysics Prize in 2004, the Simon Memorial Prize in 2008, and the Leo Esaki Prize in 2014.