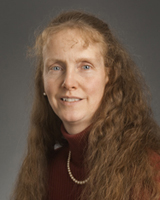 Dr. Elisa Barney Smith joined the faculty at Boise State University in September 1999. Her research focuses on image processing and machine learning. She has been a visiting professor at University of the Saarland (Germany), LORIA (France) and Telecom ParisTech(France).

From 1989 to 1993 she worked as an engineer at the Naval Undersea Warfare Center in New London, CT. In 1993, she had a research internship at the NATO SACLANT Centre in LaSpezia, Italy. Her work at both NUWC and SACLANT Centre involved designing automatic target classification algorithms and systems that utilize passive acoustic data.

Elisa was an adjunct faculty in the Computer Science Department at the State University of New York (SUNY) at Plattsburgh for the Spring of 1999. She was an adjunct faculty at the Thames Valley State Technical College (now Three Rivers State Technical College) in Norwich, CT from 1992 to 1993. She also earned secondary (7-12) teaching certification in Math and Physics for the State of New York.

Dr. Barney Smith is a member of IEEE (Institute of Electrical and Electronics Engineers) and SPIE (Society of Photo-optical Instrumentation Engineers). She was chair of the Boise section of IEEE from 2000-2003, and chair of Region 6’s North-East Area from 2009-2013.