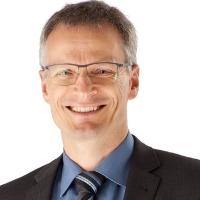 Dr. Rainer M. Storn is Director of R&D Platform Software at Rohde & Schwarz GmbH & Co KG, Germany. His interests in science and electrical engineering started early in his teenage years, and in 1979 he was among the first 15 winners of the European circuit contest “EUROTRONIK.” He received his Diploma degree in electrical engineering in 1984 at the University of Stuttgart, and earned his Ph.D. with summa cum laude on “Algorithms and Architectures of the Discrete Fourier Transform for the Fast Convolution of Real-Valued Signals” at the “Institut für Netzwerk- und Systemtheorie,” Univer- sity of Stuttgart in 1990. Rainer Storn started to work at the central research facilities of Siemens AG in Munich where he first worked on a multiprocessor-based connectionless server architecture for Asynchronous Transfer Mode (ATM) technology. He was a lecturer at the University of Innsbruck and at the Siemens educational facilities on “Queuing Theory.” In 1992 he was assigned head of SW-development supervising 12 development engineers in the domain of metropolitan area networks. In 1994 he was granted a Post-Doc Fellowship followed by a Senior Visitor Leave grant at the “International Computer Science Institute” (ICSI) in Berkeley, USA, to work on the worldwide first transatlantic ATM network between the USA and Germany. Since his Ph.D. studies Rainer Storn was interested in optimization techniques, and in 1995 during his stay at ICSI the breakthrough happened when Ken Price and himself invented Differen tial Evolution (DE) which was first published in the seminal ICSI Technical Report TR-95-012, “Differential Evolution—A simple and efficient adaptive scheme for global optimization over continuous spaces.” After this achievement Rainer Storn launched several papers on DE in quick succession. He is the author of 13 patents, more than 44 papers and articles and coauthor or contributor of five books, among them Differential Evolution—A Practical Approach to Global Optimization by Springer. He is reviewer of the IEEE Transactions on Signal Processing, IEEE Transactions on Evolutionary Computation, IEEE Transactions on Systems, Man and Cybernetics, IEE Proceedings on Vision, Image and Signal Processing, Journal of Global Optimization, Neural Computing and Applications, and the European Journal of Operational Research. Since 2005 he is a Senior Member of the IEEE. Rainer Storn has applied DE numerous times in industrial applications and has helped to include DE into several commercial SW packages. Since 2005 he has specialized on SW-defined radios (SDR) at Rohde & Schwarz and has helped build numerous professional radios especially for the airborne market where design assurance standards like DO-178C, and DO-254 have to be followed to achieve high product reliability and maintainability. Rainer Storn is also actively participating as a lecturer at the Rohde & Schwarz internal education facility on topics such as SDR, SW quality standards and cut- ting-edge optimization. In 2017, he received the Evolutionary Computation Pioneer Award by the IEEE Computational Intelligence Society.

When Do We Resort to EC in the Communications Industry, and What is Needed in the Future? - IEEE Congress on Evolutionary Computation 2017
545 views