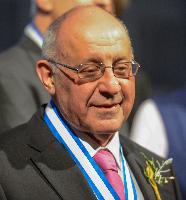 Shlomo Shamai (Shitz) received the B.Sc., M.Sc., and Ph.D. degrees in electrical engineering from the Technion—Israel Institute of Technology, in 1975, 1981 and 1986 respectively.

During 1975-1985 he was with the Communications Research Labs in the capacity of a Senior Research Engineer. Since 1986 he is with the Department of Electrical Engineering, Technion-Israel Institute of Technology, where he is now a Technion Distinguished Professor, and holds the William Fondiller Chair of Telecommunications.

He has been awarded the 1999 van der Pol Gold Medal of the Union Radio Scientifique Internationale (URSI), and is a co-recipient of the 2000 IEEE Donald G. Fink Prize Paper Award, the 2003, and the 2004 joint IT/COM societies paper award, the 2007 IEEE Information Theory Society Paper Award, the 2009 and 2015 European Commission FP7, Network of Excellence in Wireless COMmunications Best Paper Awards, the 2010 Thomson Reuters Award for International Excellence in Scientific Research, the 2014 Europian Association for Signal Processing (EURASIP) Best Paper Award, and the 2015 IEEE Communications Society Best Tutorial Paper Award. He is a Highly Cited researcher and is listed in the 2015 Thomson Reuters “The World’s Most Influential Scientific Minds”. He is also the recipient of 1985 Alon Grant for distinguished young scientists and the 2000 Technion Henry Taub Prize for Excellence in Research. He has served as Associate Editor for the Shannon Theory of the IEEE Transactions on Information Theory, and twice on the Board of Governors of the Information Theory Society. He has also served on the Executive Editorial Board of the IEEE Transactions on Information Theory and on the IEEE Information Theory Society Nominations and Appointments Committee.