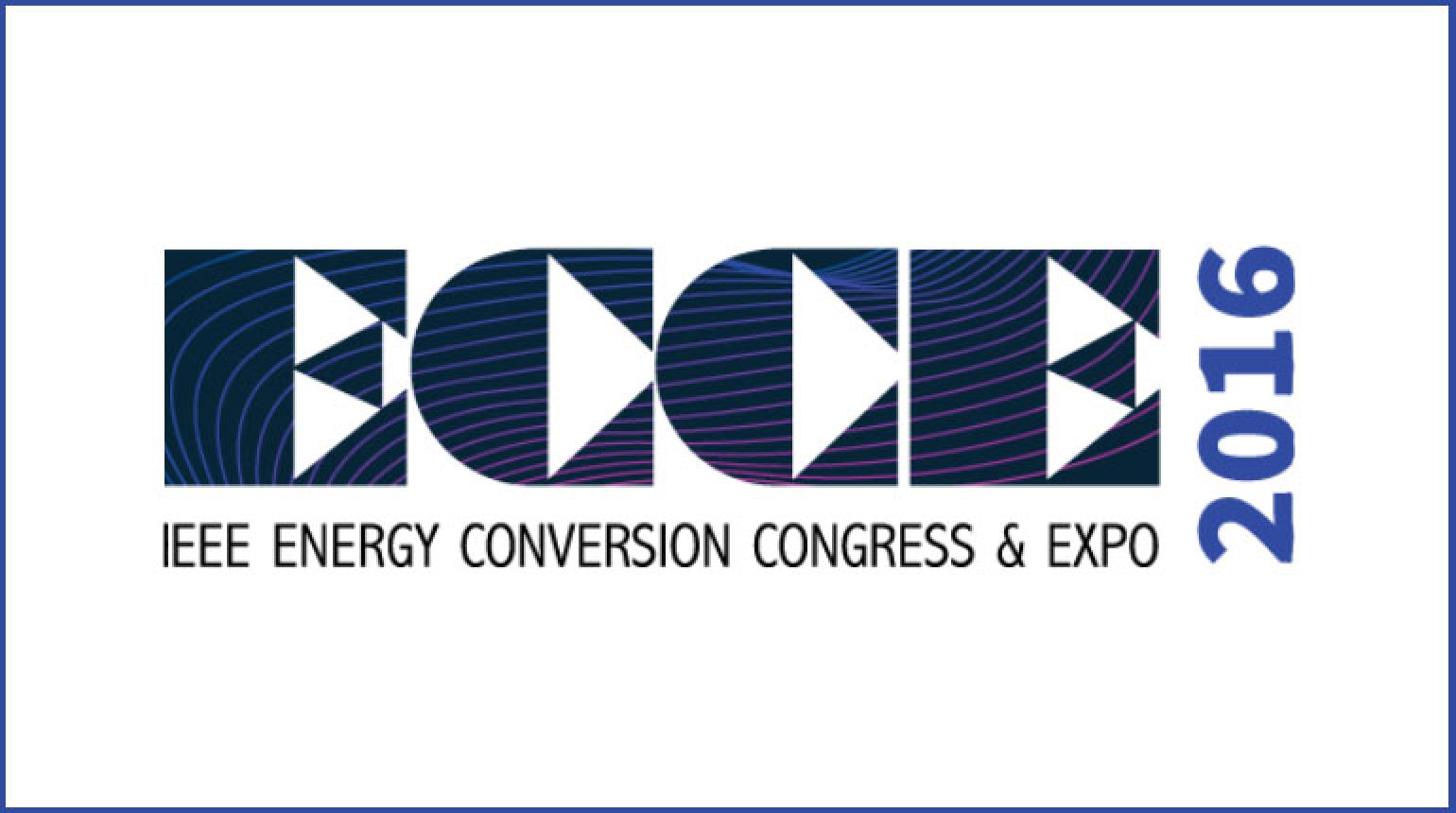 This is a collection of tutorials recorded at the IEEE Energy Conversion Congress and Expo (ECCE). Members of the IEEE Power Electronics Society (PELS) enjoy free access to these videos. To learn more about PELS membership, please visit http://www.ieee-pels.org/membership/join-pels

Other resources from PELS, such as slides and tutorials, are available at their resource center.

Shipboard DC Microgrids
[3 Videos ]
Instructors: Josep M. Guerrero, Aalborg University, Denmark, Rober Cuzner, University of Wisconsin - Milwaukee, US, Giorgio Sulligoi, Trieste University, Italy, Shantha Gamini, Univ. of Tasmania, Australia Under normal operating conditions at sea, the ship electrical system can be considered as a typical isolated microgrid. When the ship docs to the seaport and is powered with shore power it makes a grid connected microgrid. Thus, ship microgrids may resemble some analogies to commercial microgrids with similar issues and opportunities. Moreover, with the ever growing demands for emission reduction and fuel efficiency improvement, sustainable energy sources are becoming an integral part of marine electrical power systems. In addition, the intermittency and slow dynamics of these sources together with the presence of pulse loads, such as radar, make energy storage inevitable in future shipboard power systems to achieve faster transient characteristics. These sources and energy storage elements are predominantly dc and thus onboard dc distribution is often used for integration and thereby improve the energy conversion efficiency. Therefore, future shipboard power systems are predicted to be predominantly dc microgrids. This tutorial provides an overview of power system architectures of present and future ship microgrids, various sources, loads and their characteristics, control technologies and optimization methods in both islanded and grid connected operations. Protection coordination, multi-zonal architectures and fault isolation in future shipboard dc microgrids are also discussed in detail as the challenges in realization of future MVDC shipboard microgrids. The tutorial session is recommended for audience from both industry and academia with an interest in ship microgrids. In general, any participant who is interested in learning about the latest trends in this area is welcomed.
Show videos in this product
Purchase

Modeling and Control of Grid Inverters
[2 Videos ]
Instructor: Mark Dehong Xu, Zhejiang University, China With the increase of renewable energy penetration to the utility, the requirements to the gird inverter become higher and higher. One aspect of these requirements is that the grid inverter has higher power quality. Therefore, LCL filters have been widely used in the grid inverter. However, the grid inverter with LCL filter is sensitive. The damping control of it is critical to its proper operation. To analytically design the controller for the grid inverter, dynamical models for either single-phase or three-phase inverters with LCL filter are needed. With the dynamical model, transfer functions in dq rotating frame are able to be derived. Then the control can be designed analytically with traditional control theory. Since the transfer function of the grid inverter with LCL filter is the 3rd order, the bandwidth of the close loop will become narrower with the conventional PI controller design methodology. In this tutorial, a novel control scheme is introduced, which is kwon as Weighted Average Current Control(WACC). With WACC, the transfer function is transformed into the 1st order. It can widen the bandwidth significantly and realize damping control at the same time. Extensions of Weighted Average Current Control will be also introduced. DC current injection to the grid, which is caused by the grid inverter, is harmful to devices in the distribution systems. Generally the DC current injection occurs due to the asymmetry of the power device characteristics and control or gating drives in the grid inverter. An active DC current rejection control to the Grid is introduced. It is effective for both single phase and three phase grid inverter. The power quality of the grid inverter is deteriorated when the harmonics of the PCC voltage is poor. It is especially serious for high power grid inverters since the PWM switching frequency is deliberately selected to be lower to satisfy the efficiency requirement. Selective harmonics suppressing control loop may be added to reduce the effect of PCC voltage harmonics influence. For three phase gird inverter, there exist different PWM methods such as Continuous PWM, Discontinues PWM, Selective Harmonics Elimination PWM(SHEPWM) etc. The power loss distribution in the components of the grid inverter varies with the changing of the loading. One PWM method, which is good for the heavy load, may be not ideal for the light load. On the other hand, one PWM method, which is good for static state such as SHEPWM, may be not suitable to Low Voltage Ride Through condition. Hybrid PWM for the grid inverter comprises with the different operating conditions. It can increase the performance of the grid inverter with the regards to the entire loading condition.
Show videos in this product
Purchase

Renewables, Energy Storage and Power Electronics as Enabling Technologies for the Smart Grid
[2 Videos ]
Instructors: Dr. Haitham Abu-Rub, Texas A&M University at Qatar Omar, USA, Dr. Omar Ellabban, Texas A&M University at Qatar Omar, USA The smart grid (SG) as a research area is advancing dealing with a wider range of topics such as power systems, energy generation and telecommunication. The conventional utility grid used to operate in a passive mode absorbing energy from the substations and delivering it to the customers. This approach is well developed but the needs of the state-of-the-art technology require a bidirectional flow of power and data. Nevertheless, smart grid systems provide more flexible, reliable, sustainable, secure and two- way communication service. Especially, integration of renewable energy sources, electrical vehicles and distributed generations (DG) in to network can be achieved in an efficient way in smart grid system. All these positive aspects of smart grids have been attained by integration of power electronics and telecommunication technologies with the grid. This presentation deals with contributions of power electronics to SG in the context of generation, conversion, and distribution.
Show videos in this product
Purchase

The Origin of Converters
[2 Videos ]
Instructors: Tsai-Fu Wu, National Tsing Hua University, Taiwan PWM converters have been widely applied for power processing and they are typically the stems of other types of converters, such as quasi-resonant, Z-source and switched-inductor hybrid converters. Development of PWM converters has been spanning over a century, starting from the buck converter. The well-known PWM converters include buck, boost, buck-boost, uk, SEPIC, Zeta, Z-source, quasi-Z source, etc. Many attempts have been proposed to develop these converters based mostly on canonical cell concepts and by introducing extra LC filters to the cells. Charles Darwin published a book, namely ?The Origin of Species?. He claimed organic beings were evolved from the original species. Analogously, does there exist the origin of converters? This tutorial lecture presents identification of the original converter, from which the rest of converters can be evolved and derived systematically. The processes of converter evolution and derivation including decoding and synthesizing will be then presented, which bridge transfer gains or codes to converter topologies uniquely. Unlike conventional approaches based on switching cell or LC cell concept, we develop converters from the original converter and its derived. During presentation, the well-known converters will be illustrated with the discussed processes. This tutorial will provide research experts, engineers and students a prospective vision of power converter evolution, derivation and development.
Show videos in this product
Purchase

Predictive Control - A simple and Powerful Method of Control Power Converters and Drives
[2 Videos ]
Instructors: Ralph Kennel, Technische Universitat Munche, Germany, Jose Rodriguez, Federico Santa Maria Technical University, Chile., M. Kazmierkowski, University of Technology, Poland This tutorial provides a fundamentally different perspective to control of switching power electronic systems. It is based on controlling the time evolution of the switching states (i.e., switching sequences) as well as controlling the switching transition of the power semiconductor device of the solid state electronic system. The former ? i.e., switching-sequence based control (SBC) yields rapid response under transient condition, optimal equilibrium response, and yields seamless transition between the two states of dynamics. The first part of the tutorial will primarily focus on SBC for power electronics systems. By enabling integration of modulation and control, SBC precludes the need for ad-hoc offline modulation synthesis. In other words, an optimal switching sequence for the power converter is generated dynamically without the need for prior determination of a modulation scheme (which generates a pre-determined switching sequence) in typical conventional approaches. One of the distinctions between SBC and conventional model predictive control (MPC) is that SBC ensure optimal determination of the switching sequence of the power converter under stability bound. The tutorial will provide the mechanism to carry out SBC and MPC control syntheses and demonstrate the differences between SBC and MPC. Several device, converter, and network level implementations (e.g., motor drive, multilevel converter, microgrid, parallel inverters, aircraft power system) of the SBC will be provided. The second part of the tutorial reviews control and modulation methods that fully exploit the performance potential of high-power converters, by ensuring fast control at very low switching frequencies and low harmonic distortions. To achieve this, the control and modulation problem is addressed in one computational stage. To this end, the benefits of deadbeat control methods (such as direct torque control) are combined with the optimal steady-state performance of optimized pulse patterns, by resolving the antagonism between the two. As a result, the current harmonic distortions and the switching losses can be reduced simultaneously, when compared to carrierbased PWM. Indeed, at low switching frequencies, the resulting steady-state behavior is similar to that of optimized pulse patterns. During transients, however, very fast current and torque response times are achieved, similar to deadbeat control. To this end, two control and modulation methods will be presented. First, a direct MPC with long prediction horizons. Using a branch and bound technique, the optimization problem can be solved efficiently for long prediction horizons. Large performance benefits result for converters with LC filters, which do not require an additional active damping loop. This formulation generalizes the well-known finite control set MPC formulation. Second, a fast closed-loop control based on optimized pulse patterns will be provided. Experimental results on a five-level medium-voltage drive will be demonstrated. Finally, the tutorial will focus on switching transition control (STC). The primary objective of STC is to demonstrate how key power electronic system parameters including dv/dt and di/dt stress, switching loss, electromagnetic noise emission can be controlled dynamically by modulating the dynamics of the power semiconductor devices. Both electrical and newly developed optical control mechanisms to achieve STC will be demonstrated. In the context of the latter, mechanisms for monolithic integration of switching sequence control as well as switching transition control will be outlined and the revolutionary impact of such a novel integration on system performance will be demonstrated with practical applications.
Show videos in this product