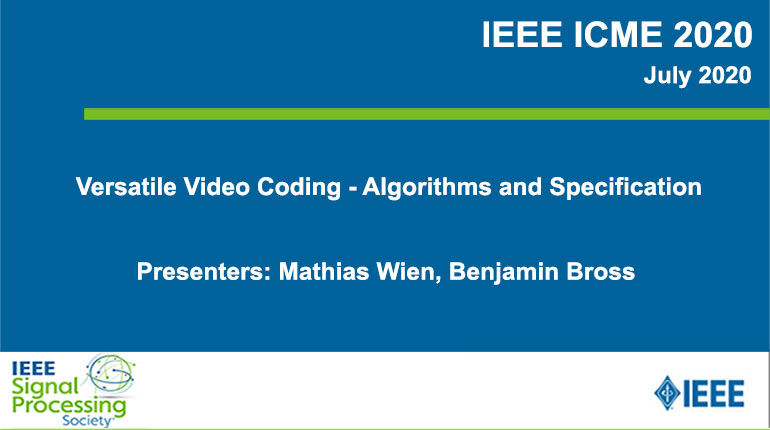 The tutorial provides an overview on the latest emerging video coding standard VVC (Versatile Video Coding) to be jointly published by ITU-T and ISO/IEC. It has been developed by the Joint Video Experts Team (JVET), consisting of ITU-T Study Group 16 Question 6 (known as VCEG) and ISO/IEC JTC 1/SC 29/WG 11 (known as MPEG). VVC has been designed to achieve significantly improved compression capability compared to previous standards such as HEVC, and at the same time to be highly versatile for effective use in a broadened range of applications. Some key application areas for the use of VVC particularly include ultra-high-definition video (e.g. 4K or 8K resolution), video with a high dynamic range and wide colour gamut (e.g., with transfer characteristics specified in Rec. ITU-R BT.2100), and video for immersive media applications such as 360° omnidirectional video, in addition to the applications that have commonly been addressed by prior video coding standards. Important design criteria for VVC have been low computational complexity on the decoder side and friendliness for parallelization on various algorithmic levels. VVC is planned to be finalized by July 2020 and is expected to enter the market very soon.

00:53:09
On-Shoring The Next Generation Of Advanced Packaging
>