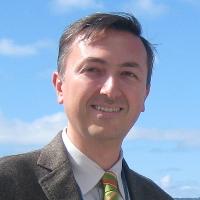 Alberto Broggi is General Manager at VisLab srl (spinoff of the University of Parma, acquired by Silicon-Valley company Ambarella Inc. in June 2015) and a professor of Computer Engineering at the Universita` di Parma in Italy, and has been pioneering the field of machine vision applied to driverless cars and unmanned vehicles in general.

As a pioneer in the use of machine vision for automotive applications and on driverless cars, he authored more than 200 publications on international scientific journals. He served as Editor-in-Chief of the IEEE Transactions on Intelligent Transportation Systems for 5 years and served the IEEE Intelligent Transportation Systems Society as President for 2 years. He is recipient of two ERC (European Research Council) prestigious recognitions aimed at developing perception for autonomous driving.

Alberto envisioned autonomous driving in the early ‘90s, right after graduating. His strong vision led him to organize a few events that are currently considered milestones in vehicular robotics: the ‘MilleMiglia in Automatico’ test (2000 km in autonomous mode in Italy) in 1998,  the “VisLab Intercontinental Autonomous Challenge” (13.000 km autonomous driving from Italy to China) in 2010, and PROUD (“Public Road Urban Driving”, downtown urban driving on public roads where for the first time a part was driven  ‘driverless’)  in 2013, are the most famous ones, besides VisLab’s successful participation to the DARPA Challenges in 2004-5-7.

Alberto contributed to create the history of autonomous and driverless cars well before the big IT companies and automakers started to be involved.  His results have been considered a reference in the field; Alberto was keynote speaker in all major conferences in the field and run projects for most worldwide car and vehicle makers.

As soon as big companies clearly understood the benefits of autonomous driving and embarked in their own projects to create real products, Alberto's entrepreneurial attitude pushed the VisLab spin-off well beyond pure research, towards the productization of VisLab’s technology. To this purpose amongst many offers, he chose to merge with chip maker Ambarella in order to bring computer vision technology into a chip to autonomously drive future cars.

Alberto is an IEEE Fellow and IAPR Fellow.