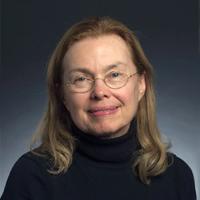 Gail Carpenter's neural modeling work began with her 1974 mathematics PhD thesis, Traveling wave solutions of nerve impulse equations. In a series of papers published in the 1970s, she defined generalized Hodgkin-Huxley models, used dynamical systems techniques to analyze their solutions, and characterized the qualitative properties of the burst patterns that a typical neuron may propagate.

In recent years, Gail has defined a novel approach to information fusion, showing how a neural model based on cognitive learning principles can derive consistent knowledge from sources that are paradoxically both inconsistent and accurate, as when a young child hears the family pet variously called Spot, puppy, dog, dalmatian, mammal, and animal. Even though no inter-class relationships, links, or probabilities are provided during training, a distributed learning system derives knowledge of relationship rules, confidence estimates, equivalence classes, and hierarchical structures. Other aspects of her research include the development, computational analysis, and application of neural models of vision, synaptic transmission, and circadian rhythms. Her work in vision has ranged from models of the retina to color processing and long-range figure completion.

Gail obtained her graduate training in mathematics at the University of Wisconsin, and taught at MIT and Northeastern University before moving to Boston University, where she is a professor in the departments of cognitive and neural systems (CNS) and mathematics; director of the CNS Technology Lab; and co-PI for the NSF Science of Learning Center CELEST: Center of Excellence for Learning in Education, Science, and Technology. She has been elected to successive three-year terms on the Board of Governors of the International Neural Network Society (INNS) since its founding, in 1987, and received the INNS Gabor Award. She has also served as an elected member of the Council of the American Mathematical Society, and is a charter member of the Association for Women in Mathematics. She is the first woman to receive the IEEE Neural Networks Pioneer Award.