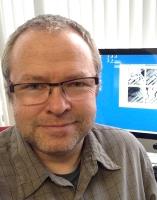 Hendrik Ohldag received the Ph.D. in experimental physics from the Universität Düsseldorf, Germany, in 2002. He joined the Stanford Synchrotron Radiation Light Source (SSRL) in 1999 as a research assistant as part of his Ph.D. research. After a postdoctoral fellowship at SSRL he became a permanent member of the research staff in 2005. Between 1999 and 2002 he was a visiting researcher at the Advanced Light Source (ALS) at Berkeley National Laboratory. Since 2014 he is a visiting researcher at New York University.

Dr. Ohldag was awarded the David. A Shirley Award at the ALS in 2006 for “outstanding contribution in using photoemission electron microscopy for the study of magnetic materials.” He is a member of the IEEE Magnetics Society and the chair of the Magnetic Interfaces and Nanoscale Device Division of the American Vacuum Society. He has authored or co-authored over 50 peer-reviewed papers and book chapters which have been cited over 2500 times. He has participated in the organization of 25 international conferences and workshops. His research focuses on the use of X-ray microscopy to study the dynamic and static properties of complex magnetic materials.