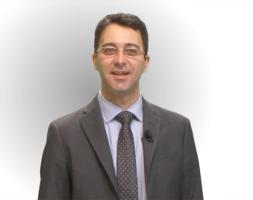 Luca De Vito (M’10–SM’12) received the master’s (cum laude) degree in software engineering and the Ph.D. degree in information engineering from the University of Sannio, Benevento, Italy, in 2001 and 2005, respectively. His master’s thesis was on automatic classification and characterization of digitally modulated signals. He joined the Laboratory of Signal Processing and Measurement Information, University of Sannio, where he was involved in research activities. In 2008, he joined the Department of Engineering, University of Sannio, as an Assistant Professor in electric and electronic measurement. In 2013, he received the National Academic Qualification as an Associate Professor. Since 2015, he is a Visiting Scientist at CERN, Geneva, Switzerland, collaborating with the magnetic measurement and the control engineering sections. He is member of the IEEE since 2010, he is member of the IEEE Instrumentation and Measurement Society, of the IEEE Aerospace and Electronic System Society, and of the IEEE Standards Association. He is Senior Member of the IEEE since 2012. He member of the AFCEA and is Young President of the AFCEA Naples Charter.

He published more than 90 papers on international journals and conference proceedings, mainly dealing with measurements for the telecommunications, data converter testing and biomedical instrumentation.