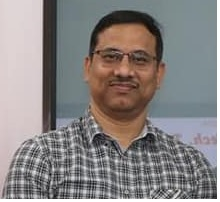 Dr. Amlan Chakrabarti is a Full Professor in the A.K.Choudhury School of Information Technology at the University of Calcutta. He was a Post-Doctoral fellow at the School of Engineering, Princeton University, USA during 2011-2012. He has 20+ years of experience in Engineering Education and Research. He is the recipient of the DST BOYSCAST fellowship award in Engineering Science (2011), the Indian National Science Academy (INSA) Visiting Faculty Fellowship (2014), the JSPS Invitation Research Award (2016), Erasmus Mundus Leaders Award (2017), the Hamied Visiting Professorship from University of Cambridge, UK (2018), Siksha Ratna Award by Dept. of Higher Education Govt. of West Bengal (2018) and has been awarded as the Fellow of West Bengal Academy of Science and Technology (2022).

Since his Ph.D. research, Dr. Chakrabarti has been an active researcher in Quantum Computing Logic Synthesis, Quantum CAD and Quantum Algorithms. In his Ph.D. research, he developed strategies for quantum logic synthesis and was one of the key contributors in formulating the nearest neighbor problem.  During his Postdoctoral Research at Princeton University, he contributed to the circuit optimization techniques for PMD-specific quantum gate libraries and also in the development of the first-of-its-kind Fault-Tolerant Quantum Logic Synthesis tool coined as “FTQLS”. He and his research team have made good contributions to Quantum Algorithms such as Random Walks, Binary Welded Tree, Graph Coloring and Click problems, which solves many of the important computing problems in the Quantum Computing Domain. In 2021 his research group devised the entire Ant-Colony Optimisation problem in the Quantum-setting, which was the first of its kind and this resulted in the award of IBM Quantum Researchers Access Award to his group, and they were the first group in India to receive this award. His Ph.D. students are working in top Quantum Computing Organizations such as HCL, ATOS, PWC, etc. He is also the mentor of the first Quantum startup in Eastern India coined “QRDLab”.

He has also served in various capacities in various higher education organizations both at national and international levels. He has published around 200+ research papers in referred journals and conferences and has graduated 20 Ph.D. students. He is the Series Editor of Springer Transactions of Computer Systems and Networks, the Series Editor of the Springer Book Series on “Water Informatics, an Associated Editor of the Elsevier Journal of Computers and Electrical Engineering and Guest Editor of the Springer Journal of Applied Sciences. He is a Sr. Member of IEEE and ACM, IEEE Computer Society Distinguished Visitor, Distinguished Speaker of ACM, Secretary of IEEE CEDA India Chapter, Member of the International Water Association, Vice President of the Data Science Society and Life Member of CSI India. His areas of research are Quantum Computing, Machine Learning, Computer Vision, Reconfigurable Computing and VLSI CAD.