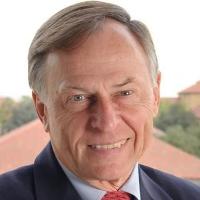 Jim Plummer was born in Toronto, Canada. He obtained his BS degree from UCLA and his MS and PhD degrees in Electrical Engineering from Stanford University. After graduating from Stanford, he worked as a research staff member in the Integrated Circuits Lab at Stanford for several years before joining the Stanford faculty in 1978 as an associate professor. He became professor of electrical engineering in 1983.

His career at Stanford has included serving as director of the IC Laboratory, senior associate dean in the School of Engineering, and chair of the Electrical Engineering Department. He was the Frederick Emmons Terman Dean of the School of Engineering from 1999 until 2014. He also holds the John Fluke Professorship in Electrical Engineering. During his tenure as dean, the school renewed or replaced much of its laboratory and classroom space, dramatically increased the number of students majoring in engineering and created interdisciplinary programs like the Bioengineering Department, which is jointly operated with the medical school, and the Hasso Plattner Institute of Design (d.school) that changed the nature of engineering education. Plummer was a strong advocate as dean, for ensuring that engineering majors take advantage of the full set of opportunities at a liberal arts institution like Stanford.

Plummer has worked in a variety of areas in the broad field of silicon devices and technology. Much of his early work focused on high-voltage ICs and on high-voltage device structures. He and his group made important contributions to integrating CMOS logic and high-voltage lateral DMOS devices on the same chip and demonstrated circuits operating at several hundred volts. This work also led to several power MOS device concepts such as the IGBT which have become important power switching devices.

Throughout the 1980s and '90s, a major focus of his work was on silicon process modeling. This work involved many students and other faculty, particularly Professor Bob Dutton, and resulted in the development of several generations of SUPREM, which has become the standard process modeling tool used worldwide today. His recent work has focused on nanoscale silicon devices for logic and memory and has demonstrated new device concepts such as the TRAM thyristor based memory cell and the IMOS device which achieves <kT/q subthreshold slopes.

Plummer is a member of the National Academy of Engineering, the American Academy of Arts and Sciences and a fellow of the IEEE. He has received many awards for his research, including the 1991 Gordon Moore medal for Solid State Science and Technology from the Electrochemical Society, the 2001 Semiconductor Industry Association University Research Award, the 2003 IEEE J. J. Ebers Award, the 2003 IEEE Van der Ziel Award and the 2007 IEEE Andrew Grove award.

He has graduated more than 80 PhD students with whom he has published more than 400 journal papers and conference presentations. These papers have won eight conference and student best paper awards including two at IEDM and three at ISSCC. His recent textbook, "Silicon VLSI Technology: Fundamentals, Practice and Modeling," is used by many universities around the world. He has also received three teaching awards at Stanford. He serves on the Board of Directors of several public companies including Intel and Cadence.

Plummer directed the Stanford Nanofabrication Facility from 1994 to 2000 and received an NSF commendation in 2000 for national leadership in building the NNUN, a consortium of universities who opened their nanofabrication facilities as national resources for industry and for students from around the nation.